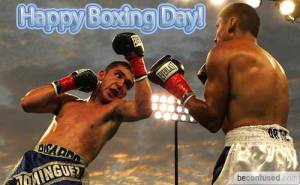 Now that I’ve gone to a once a week training schedule for boxing, I find myself getting really excited by the time Friday comes along.  The daily fitness routine I’ve found that can work with my schedule these days is based around early morning yoga, but it’s the thought of boxing that gets me pumped up and ready to go.

My Saturday morning boxing routine begins with dropping my daughter off for her Aikido practice, after which I take a nice long walk over to  Gleason’s Gym. By the time I get there I’ve logged 2-1/2 miles at a pretty fast pace so I am nice and loose.  About a 1/2 mile out, I start pumping my arms a bit so that by the time I hit the gym I feel ready for one of my two favorites:  three rounds on the double-ended bag or three rounds of shadow boxing using the slip-rope.

For those who don’t usually practice, the slip-rope is real old-school consisting of something as simple as a clothes line tied between two poles or across the ring around 15 feet apart at about chest height. The object is to move forwards and backwards along the line and “slip” under as practice for slipping a punch. The slip-rope is also great for practicing upper cuts under the line — or for simulating jabs to the body and jabs to the head.  By around the third round, I feel loose enough to dance around the slip-rope going forwards, backwards, and circling.  Having the rope at chest height not only helps to “remind” me to slip, but also gives me an approximation of where to place body versus head punches.

Alternatively, I’ll use the double-ended bag for warm-ups starting with a round of lefts and finishing the second two rounds with combinations and a lot of hooks or upper cuts off the jab.

By the end I’m exhausted, but happy — and ready for the quick walk back over to pick-up my daughter.  I hope to keep this going for about three months so that by April I’ll be fit enough to get back into the ring for some light sparring.  We’ll see!