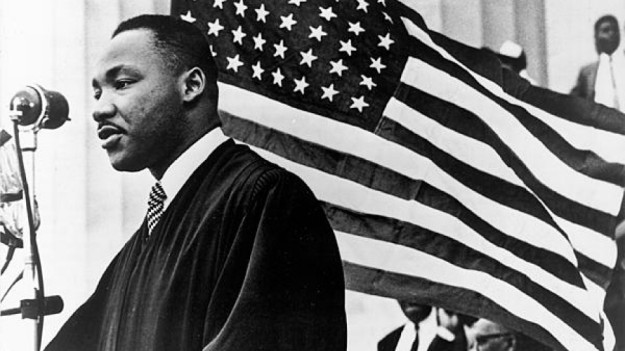 Today would have marked Dr. Martin Luther King Jr.’s 89th birthday. This image of Dr. King flanked by the American flag is particularly poignant–since his sacrifice to the greater good of the United States resonates so powerfully in our polity today. We should not forget that the America of his dream continues to fight to shout out his teachings with full pride of place–no matter the obstacles.

On September 12, 1962, Dr. King gave a speech at New York City’s Park Sheraton Hotel commemorating the 100th anniversary of what was known as the preliminary Emancipation Proclamation by President Abraham Lincoln. The speech was thought to have been lost for decades until a young intern discovered an audio copy of it in the New York State Museum in Albany.  As noted by WBAI in their commentary on the speech: At the end of the speech, Dr. King quotes a preacher (former slave) who he says “didn’t quite have his grammar right but uttered words of great symbolic profundity.”