Getting back to basics: the boxing stance 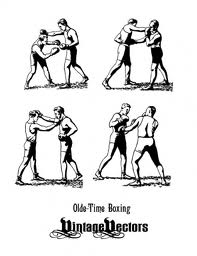 I had a terrific morning yesterday working out with Lennox Blackmore.  We spent four rounds on the focus pads on such fundamentals as clean doubled-up jabs which brought us all the way back to the beginning — the stance.   Yep, by sitting lower in my stance with my body angled forward, my jabs were crisper, my slips more economical and rights in the pocket with a nice hard “thwack” sound every time it hit the pad.

Once on the double-ended bag for my second set of four-rounds, I worked more and more on keeping my stance low and thereby really pushed out punches from my core.  And that, I realized, is the entire point of the stance.  Sure, a proper stance provides a boxer with the right amount of balance, but more fundamentally it allows a boxer to use his or her core energy and strength to throw punches that are swift and sure with an economy of movement that saves energy and shaves milliseconds off the time needed to connect.

Talk about a wow.

And that’s the thing about boxing.  Many training sessions follow a rout pattern of warm-up, training steps such as shadow boxing, focus pads, sparring, slip rope, heavy bag, double-ended bag, speed-bag and so on in whatever combination is being worked on that day, however, every once in a while, it all connects and boom — it comes together again in some new more fundamental way.

A lot like life, no?  One wanders along doing the same thing day after day and suddenly a thunderbolt hits and the pathway seems clearer.  And while it might be nice if every day was greeted with an epiphany of the day, the fact is there’s something down right sweet about finding it buried deep within the work.  Leastways, I find it to be the case.