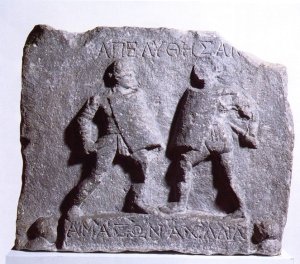 Boxing has long been considered a hypermasculine sport harnessing masculine ideals of virility and aggression. It has resonated across millennia as an icon of sacred tradition that stretches as far back as the ancient Greeks with even earlier references to the sport in Mesopotamian cultures.

The earliest known literary reference to boxing is Homer’s depiction of the boxing match at the Funeral of Patroclus in The Illiad. Homer begins this section with the older Nestor’s talk with the Greek hero, Achilles:

My legs no longer firm, my friend, dead on my feet,

Nor do my arms go shooting from my shoulders—

the stunning punch, the left and right are gone.

Oh make me young again, and the strength inside me

When thinking about martial contests, however, what might not be so readily apparent is that women have also enacted one or another form of martial ritual including boxing for just as long.

Accounts of Spartan educational regimens for young women in the same time period as The Iliad show that young female Spartans were trained for fighting in the same short tunic[1] as young men and competed against them during training on a regular basis. The Roman poet Propertius also wrote of women with their “arms [bound] with thongs for boxing.”

Other forms of Greco-Roman cultural representations include the marble relief sculpture depicting two female gladiators known as the Missio of Halicarnassus from the first or second century CE and the black-figured hydria of Atalanta and Peleus Wrestling from 550 BCE.

Based on the myth of Atalanta, the hydria depicts her defeat of Peleus in a wrestling match at the funeral games of King Pelias. Given the importance of Funeral Games as “symbolic conflict” that both stand in for actual combat (the physical clashing of the bodies) and as a contest of honor, wherein the vanquished is raised up by the victor, the inclusion of female figures in such representations is certainly provocative.

However, given that Atalanta is also depicted as a particular favorite of Artemis, Goddess of both the hunt and maidenhood, we can begin to tease out a notion of gender identity in Greco-Roman culture which allows for a “third way” if you will: that of the maiden huntress/warrioress that also links to the myth of the Amazons.

The warrior women, variously described as a tribe of gyno-centric warrior females were quoted by Herodotus as saying “We would find it impossible to live with [other] women, because our practices are completely different from theirs. We haven’t learnt women’s work. We shoot arrows, wild javelins, ride horses—things which your women never have anything to do with.”

It can be argued that such depictions are liminal, based on a time between girlhood and motherhood. In this in-between space these young women are depicted as small breasted and virginal, thus creating an otherness between maleness and femaleness, on the order of Goddess Artemis and Diana. The status of these figures makes them free to hunt and even pursue martial enactments of maleness, however, the price of doing so is to remain pre-sexual. 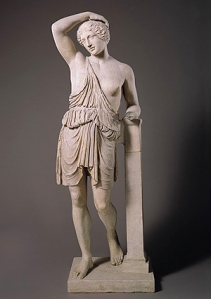 The myth of Atalanta is a perfect embodiment of this ideal. Atalanta enacts warriorness side-by-side with her shipmates Jason and the Argonauts, but can only do so as long as she remains a virgin. The depiction of the mythic women also inevitably shows them in short tunics rather than in long ankle length skirts – thus clearly mimicking the dress of Artemis and Diana. And in some cases, representing a depiction of actual cross-dressing: wearing a short tunic skirt instead of a long skirt.  It should be noted that there are figures of Artemis in a long gown, however, those skirts typically open and show that she is free to run.

To my way of thinking, these are important threads in considering the significant place of female fighting figures historically.

[1] Spartan training of young girls was also under the influence of the Goddess Artemis who was often depicted in a short tunic. Throughout Greece, girls participated in formal Games (though not the Olympics) primarily in foot races with aspects of religious ritual associated with such participation.