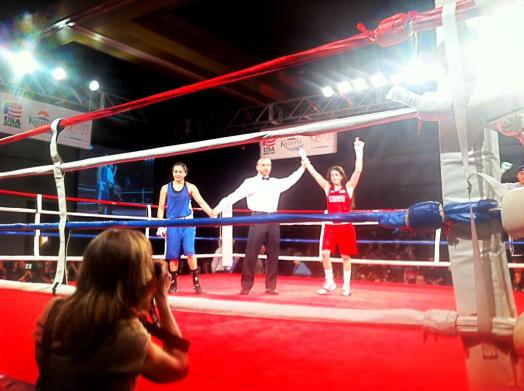 What a great night of boxing for the elite women in the competition! They fought tough, hard and strong with some returning champions and some newcomers getting the nod!

To my mind, it is hard to choose which fights delivered the most, though I have to say that 30 year old, Christina Cruz delivered with a capital D, executing a smart, savvy game plan, in her bout against Ayanna Vasquez, setting up Cruz’s next challenge, that historic 7th NY Daily News Golden Gloves title.

Olympian Queen Underwood’s four round non-stop battle against teammate and champion in her own right, Tiara Brown was nothing short of awesome. Both women fought their heart’s out trading hard shots, combinations and a yin-yang momentum that kept shifting. Still Underwood was able to pull out the close split-decision to claim the 132 lb. championship, but to my mind, both women came away women came away winners having put on a tremendous effort.

Olympian Marlen Esparza also won by split decision after four rounds of a surprising and spirited defense from Virginia Fuchs in the 112 lb. weight class. Fans really got into the fight and actually booed when the decision was called.

At 106 lbs, the two mighty-mights fighting for the championship, Elisha Halstead and Alejandra Mercado, set the tone for the night: two terrific boxers working everything they had in the ring. In the end Halstead got the nod with a split decision.

In the 125 lb. weight class, newcomer Jen Hamann gained momentum for four rounds to win the close split decision over Rianna Rios. Jen’s third round, where she threw tough, hard shots and a lot of body/head combinations turned the tide for her, and by the fourth round she knocked Rios around enough to get her a standing eight.

The veteran Bertha Aracil, who fought with a cool, lean style, cruised to victory in the 141 lb. weight class over Faith Franco to gain the championship.

Another great battle was Danyelle Wolf’s effort with Fallon Farrar in the 152 lb. weight class. Both fighters came out throwing hard shots from the outset, but Wolf’s superior skills and ring generalship gave her the decisive win and the championship.

Franchon Crews once again claimed victory of the middleweight title at 165 lbs. over teammate Raquel Miller. The spirited fight gave Crews the win and the chance to reign as champion.

The 178 lb. weight class saw Tiffanie Hearn win the title over Dara Shen. Hearn fought at a fast pass and pushed her way past Shen to claim the championship.

The new scoring system certainly has some kinks to work out, but as Tiara Brown noted, in training for it, the fighters have had the chance to execute truly remarkable performances.

Christina Cruz was also quoted as saying of her opponent, “She’s a strong girl, but with the new scoring system, I was able to pick my shots better. Plus, I think I kept my composure a little better in the last round than she did.”

With these women on the roster of Team USA along with the young women who fought alongside them, there is a lot to be proud of looking ahead to Rio 2016!

Congratulations to all the winners and to everyone with the heart of a lioness who took to the ring!