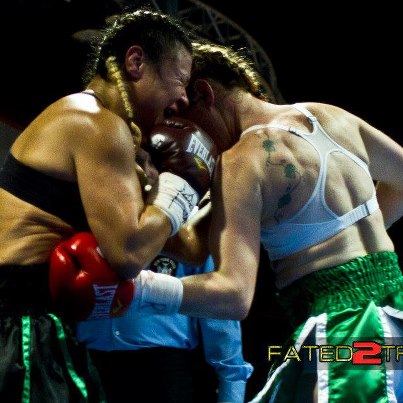 Heather Hardy with a fierce bodyshot sealing her UD against Ivana Coleman. The win brings Hardy to a 3-0 record. Credit: Heather Hardy

Having shadow boxed at Gleason’s Gym yesterday for the first time in several weeks, it brings to mind the tremendous effort required to perfect one’s skills. Looking around me I felt humbled by the effort and work of my fellow gym denizens. From 8 to 80 it seemed, men, women and a fair number of kids were working hard to perfect their skills.

The person who struck me the most, however, was Heather Hardy (2-0) who is readying for her third professional fight on Saturday, December 8, 2012 at the Resorts World Casino in Jamaica, Queens, New York.

Having turned pro in August of this year, Heather is considered a fighter’s fighter. She works with hard-edged discipline and never stops moving. A national Golden Gloves champion, Heather has called Gleason’s Gym her own for several years training with Alicia Ashley, Devon Cormak and Hector Roca. She is also a talented trainer in her own right giving her students a well-rounded workout that includes a fair amount of core work in addition to boxing skills in and out of the ring.

The mother of a seven-year old, Heather works for her family and for the chance to be a world champion. She also works for the love of the sport with an attention to the nuances of boxing second to none.

If you are in and around New York City on December 8th, this is a must see fight!