A Bit of Women’s Boxing History. 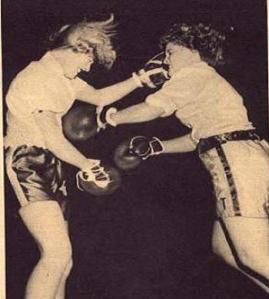 I’ve been writing about boxing most of the day in preparation for a presentation I’m giving on boxing at my college in October. I’m also finishing up the first chapter of my thesis entitled “Boundaries in Motion: Women’s Boxing.”

What I’m most intrigued by is the number of women who’ve been boxing throughout the centuries.  Like many disenfranchised groups, they have fought under the radar so to speak for a lot of the time, but have also had their exploits written about or interpreted as cultural representations in one form or another.  Here’s a smattering (note that references have been removed, however, if anyone is interested drop me an email):

Women fighters of this era beginning in 1876, included Nell Saunders who purportedly out fought Rose Harland in the first “official” female bout in the United States at Hill’s Theater in New York.  Other important fighters included Hattie Stewart, the first female world boxing champion, and Britain’s Polly Fairclough from a family of well-known boxers and wrestlers.  Polly was renowned for her prowess as both a boxer and a Greco-Roman wrestler, and holds the distinction of having been the first female to fight at London’s National Sporting Club (she fought against men), and purportedly put on an exhibition bout with Jack Johnson in Dublin.

In the modern context, there have been women professional boxers in and around professional boxing since the 1920’s in the United Kingdom, France and the United States.  During this period in Britain women’s participation in boxing was “characterized as disreputable and dangerous and self-contained in working-class venues.”  Prize fighting as an acceptable entertainment for women, however, was taking hold through such things as the advent of charity fights to aid the war effort during the first World War “under the auspices” of such societal luminaries as Anne Morgan, “the philanthropic sister of J. Pierpont Morgan.”

With attendance, came the notion of making the sport an avenue from crossing class barriers to the “carriage” trade.  In particular, to promote a Jack Dempsey bout, his manager “Tex Richard made special arrangements for women spectators,” calling it a “‘Jenny Wren’ section.”  Women also reported on boxing, most notably Katherine Fullerton Gerould who famously wrote about the Jack Dempsey versus Gene Tunney fight in 1926 for Harper’s.  Pockets of women’s boxing subcultures began to sprout up as well.  As noted by Kate Sekules in her book, “The Boxer’s Heart,” this included the Flint, Michigan “stenographer-pugilists” known as the “Busters Club.”  There was also a rise in popularity of boxing exercises in the United States and Europe during the interwar period and the emergence of “girls’ boxing troupes,”  that appeared on otherwise all male fight cards. (All Girl Bands also enjoyed some popularity at this time as popularized in the 1959 gender-bending film Some Like It Hot.)

In the late 1940’s and 1950’s Britain’s Barbara Buttrick, a 4’11” fighter with a powerful jab known as “The Mighty Atom,” took up the sport having read about the exploits of Polly Burns.  She found a trainer in London (whom she eventually married) and set out to have a career as a fighter mostly on vaudeville stages and other exhibition venues in England. After arriving in the United States in the 1950’s, however, Buttrick was able to push the sport by finding other women boxers who were going along the same path – and fighting men, one step ahead of the boxing commissioners who continued to keep the female sport underground. Still, she was able to draw large crowds and had the first televised female bout in 1954.  There were also a smattering of big crowd draws, along with a growing number of professional fighters who plied the canvas in the 1960’s and 1970’s to include such boxers as Sue “Tiger Lily” Ryan a true trailblazer for the sport of women’s boxing and such fighters as Caroline Svendsen, the first woman fighter to be licensed by the Nevada State Athletic Commission in 1975 and Pat Pindela, the first woman fighter to be licensed in California in 1976.

15 thoughts on “A Bit of Women’s Boxing History.”