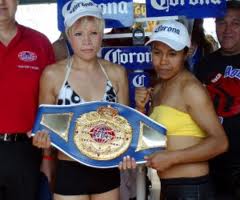 Boxing sensation and Mexico’s own Ana Maria Torres (27-3-3, 15 KO’s) made a successful title defense against the Argentinian challenger Marisa Johanna Portillo (10-4-2) at Las Cabos in Baja California, Mexico by unanimous decision. The judges scored the obviously lopsided battle 100-89 across all three score cards. American referee David Mendoza took a point from Portillo for excessive holding in the sixth round which explains the judges final scoring in the 10 round bout.

Round Nine action includes the following: 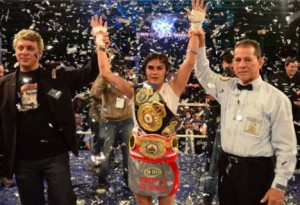 Argentina’s own Yesica Marco (18-0-1, 6 KO’s) the current interim WBA Super Bantamweight Title holder fought an impressive five rounds before her Brazilian challenger Simone Da Silva Duarte (10-1-0) threw in the towel for the TKO to become the interim WBO Super Bantamweight Title holder. Marco and Duarte had last met on April 9, 2010, when Marco gained the interim WBA title by unanimous decision after ten hard-fought rounds of boxing. This is Marco’s third successful defense of her interim WBA title. This was also Marco’s first fight in nearly six months having sustained a serious injury to her right shoulder.

The full fight is below (starts around 12:00 minutes in, though the pomp and circumstance is well worth it.  BTW, check out the packed stadium!).

In  a well-fought, surprisingly well-matched, title match, the Women’s WBF Flyweight Champion, Irma “La Guerita” Sanchez (21-5-1, 6 KO’s) was able to retain the championship with a unanimous decision against challenger Susana Cruz Perez (5-3, 2 KO’s).  The contest took place in Los Cabos, Mexico and was promoted by Hector Garcia’s HG Boxing.  As with many of the higher caliber women’s bouts in Mexico, it was a headlining bout televised to a wide audience on the Televisa network.