Ana “The Hurricane” Julaton handily defeated Jessica Villafranca to retain her WBO Super bantamweight title last night.  Julaton won a unanimous decision with the judges scoring the ten-round bout, 98-91, 96-93, and 97-20.  Julaton sustained a small cut to her forehead froms an accidental head butt.  The fight, however, was able to continue. 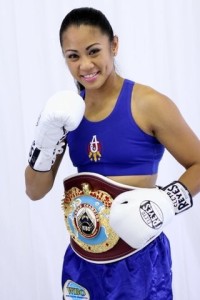 Ana “The Hurricane” Julaton (9-2-1, 1-KO) has been training her heart out at the UNLV Boxing Gym in Las Vegas, Nevada in preparation for her WBO Women’s Super Bantamweight title defense against the 18-year old Mexican fighter, Jessica Villafranca (12-3-0, 6 KOs).   The bout will be contested at the Polifuncional in Kanasin, Yucatan, Mexico.

As with Kaliesha West before her, Ana Julaton, is bringing her exciting lightening fast boxing style, honed by Freddie Roach to Mexico, in what appears to be a the beginnings of a trend for elite women fighters from the United States.

As Girlboxing has written before, Villafranca lost her last bout to Kaliesha West in a tough ten-round slug fest in August.  With Villafranca’s fight against Julaton, however, she will be fighting at her natural super bantamweight, so that may well mean that she will fight better and stronger.

Whatever the outcome, Julaton’s decision to take her game to Mexico will hopefully mean more opportunity and exposure as the fight will not only be televised on Mexico’s GMA-7, but on Philippine television as well — plus it will likely be easy to find on streaming video.

For some further insights into Ana Julaton’s life in and out of the ring, Chris Robinson has a terrific interview in the Las Vegas Examiner that is well worth the read.  The link is here.