Kaliesha West retained her title through ten rounds of fighting against challenger Claudia Andrea Lopez.  West won by majority decision with the judges scoring the bout 98-92, 98-92, 95-95.  Having live tweeted the bout, it is really hard to see how the third judge could have scored it a draw.  West was firmly in control, though the fight was tough and Lopez’s southpaw style took some getting used to.  Kaliesha has been quoted as saying, “Lopez was a crafty veteran who was aggressive during the entire fight. Other boxers avoid her because she is a tough lefty, who has experience fighting good competition. She was what we expected and then some.”

The fight is now on YouTube (albeit in Spanish).  You be the judge! 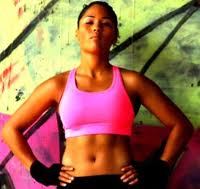 For those with access to Televisa, the 10-round, championship take-no-prisoners bout will air as part of their weekly boxing series “Sabados de Corona.” The fight card is presented by Box Latino, and is slated to be led by seven-time world champion, Mexico’s Erik “El Terrible” Morales.

West first won the WBO Bantamweight title in September of 2010 and will be offering her third WBO title defence.  Her last fight was in August 2011 when she won handily over Jessica Villafranca by unanimous decision.  This will be West’s third fight in Mexico – a place she is beginning to call home especially as there are excellent boxing opportunities for her there.

West’s opponent, Claudia Andrea Lopez has the reputation as a fierce competitor and is taking this fight after winning four straight bouts.  A champion in her own right, she is the current WBC Latino Super Bantamweight champion, however, her title will not be on the line in her fight on April 14th,

Boxing News 24 has quoted West’s father and coach Juan West as saying,  “I’ve done my research and Lopez is the type of fighter that managers avoid. She’s strong, left-handed, has a solid chin and she’s a champion. She’s had some close losses to highly rated fighters. This is an opportunity for Kaliesha to make a statement and take her game to another level. She is on a mission to gain the respect of the boxing community and to build a broader fan base by grabbing the attention of casual sports fans.”

For women’s boxing fight fans who happen to be in Mexico, tickets will be available at the Ernesto Ruffo Appel Municipal Gymnasium box office or by calling the offices of Bobby D. Presents at +1 (619) 420 8866. On fight night, the doors will open at 5pm, with the first fight starting at 6pm.

Ana “The Hurricane” Julaton handily defeated Jessica Villafranca to retain her WBO Super bantamweight title last night.  Julaton won a unanimous decision with the judges scoring the ten-round bout, 98-91, 96-93, and 97-20.  Julaton sustained a small cut to her forehead froms an accidental head butt.  The fight, however, was able to continue.

Ana “The Hurricane” Julaton (9-2-1, 1-KO) has been training her heart out at the UNLV Boxing Gym in Las Vegas, Nevada in preparation for her WBO Women’s Super Bantamweight title defense against the 18-year old Mexican fighter, Jessica Villafranca (12-3-0, 6 KOs).   The bout will be contested at the Polifuncional in Kanasin, Yucatan, Mexico.

As with Kaliesha West before her, Ana Julaton, is bringing her exciting lightening fast boxing style, honed by Freddie Roach to Mexico, in what appears to be a the beginnings of a trend for elite women fighters from the United States.

As Girlboxing has written before, Villafranca lost her last bout to Kaliesha West in a tough ten-round slug fest in August.  With Villafranca’s fight against Julaton, however, she will be fighting at her natural super bantamweight, so that may well mean that she will fight better and stronger.

Whatever the outcome, Julaton’s decision to take her game to Mexico will hopefully mean more opportunity and exposure as the fight will not only be televised on Mexico’s GMA-7, but on Philippine television as well — plus it will likely be easy to find on streaming video.

For some further insights into Ana Julaton’s life in and out of the ring, Chris Robinson has a terrific interview in the Las Vegas Examiner that is well worth the read.  The link is here. 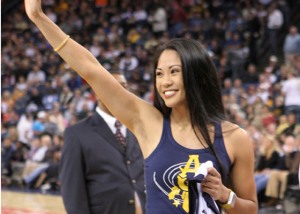 Current WBO Super Bantamweight champion, and the darling of California and the Philippines, Ana Julaton (9-2-1, 1-KO) will be defending her title against Mexico’s own Jessica Villafranca (12-3-0, 6-KOs) on September 30th at the Polifuncional in Kanasin, Yucatan, Mexico.

Julaton will be the second American championship boxer in as many months to defend her title in Mexico, following on the heals of Kaliesha West who successfully defeated Villafranca last month in a highly rated showdown broadcast on Mexico’s Televisio network.

“I want to show the Boxing World that I will fight anyone, anywhere, at any time and will do my utmost to represent the proud Filipino nation in the great traditions that they have come to expect,” said Julaton in a recent press release announcing the bout.

With respect to the matchmaking for this bout, Villafranca is an interesting choice given her recent fight record.  The 18-year-old fighter lost a match to Erica Farias at 133-1/2 pounds this past February when she was dropped in the first round. Villafranca went down to 121 pounds for her next bout on August 7th against Maria Jimenez and won (purportedly near her natural weight), and then dropped down to 118 pounds to fight against Kaliesha West on August 20th.  Given Villafranca’s relative size, that’s a lot of weight to gain and lose over a short period and while she will be fighting Julaton at 122 pounds, her weight fluctuations may well affect her fighting abilities.

The other interesting aspect of this fight is the fact that as popular and well-promoted as Julaton’s fights have been — her fight team is electing to go to Mexico where women’s boxing is not only popular, but given the respect it deserves in terms of media exposure, live television coverage and fans in the stands.  The question is how self-fulling is this?  Is it a case of — if you promote it they will come?  It sure seems like it because by putting the product out there, fans have obviously voted with their support which would seem to be why women’s boxing has heated up of late.  It is also an impetus for women to take up the sweet science — which will only serve to improve the sport.

The Julaton-Villafranca bout is being promoted by Orion Sports Management and Yucatan Boxing and will be broadcast via the Philippines GMA Network worldwide. It is also expected that the bout will be televised on Mexican television as well as available via video streaming on-line.

There is some terrific women’s boxing going on tonight!

First off — if you can get Mexico’s Televiso do because there are two fabulous female bouts on HG Boxing’s “Triple Corona” fight card! (Luckily for those of us who can’t get it live, the full bouts will likely be put up on YouTube.  You might also try to find a live video stream for some coin.) 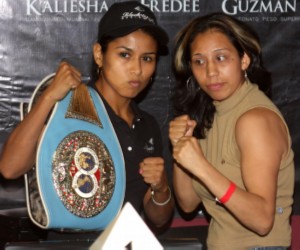 The other co-main feature female bout is none other than California’s own WBO female bantamweight champion Kaliesha “Wild Wild” West (13-1-3, 4 KO’s) defending her hard-won title against Mexico’s own Jessica Villafranca (12-2, 6 KO’s)

Over on the East Coast, Gleason’s own scholar, the ever-popular female heavyweight Sonya Lamonakis (5-0, 1-KO) will be fighting a tough rematch against Tiffany Woodard (4-4-1, 3-KO’s) at Mechanics Hall in Worcester, Massachusetts on the Broadway Boxing card.  To quote Sonya, “it’s going to be war”, and nothing new for a Lamonakis fight night!