I worked out hard on Saturday — giving it my all so to speak through my sweet 16.  I even got Len laughing when he asked me if I’d eaten my Wheaties!  Mostly it felt great to sweat and to realize that my stamina was such that I could start to maintain speed — not to say that I was rabbiting through all 16 rounds, but the four with Len felt right except perhaps for the last part of the fourth round when I could feel myself flagging.

Back on the double-ended bag after coasting a round I did forge through with speed again — all of which is allowing me to officially proclaim to myself that my goal of gaining some conditioning is finally being met!

For a 50-something out of shape person, knowing that one can get pretty much “back” to conditioning at the six months mark of training is excellent. I can actually throw myself into a jog without dying and when it comes to gym time finally finding some speed is a truly remarkable feeling.  Len even had a little bit of a wince when I threw a left jab at his body followed by the right to the pad — and not that I’m necessarily evil or anything, but that little tiny push back made me feel like a million bucks. 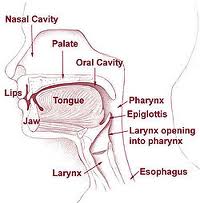 On top of all of this, I finally had a diagnosis for the coughing!  It runs out its something called Laryngopharyngeal Reflux or LPR.  Often called the “silent” reflux, symptoms and signs include coughing, thick mucous at the back of the throat, “postnasal” drip, throat irritations/throat clearing and even sore throats that seem to resolved after a day or two.

The mechanical action is the acid from the stomach backs into the esophagus through the upper esophageal sphincter.  For people who suffer from heartburn, the acid hangs around in the esophagus, however, with LPR the acid actually backs up into the voice box and the back of the throat.  Hence the symptoms!

I went in for a scope of my nasal passages and throat and low and behold, what we found was an enlarged larynx that showed evidence of having had LPR for some time. In speaking with the doctor, he told me that patients do indeed experience breathing problems upon exertion — and that is one of the reasons patients seek medical attention.

As for treatment — the primary one is a change in diet with several huge no-no’s:

I’m also being put on something call a proton pump inhibitor (PPI) — a class of medications that essentially prevents the stomach from forming acids.

I still have a few more tests to undergo to rule out a few things, but figure the diagnosis is pretty solid — now it’s just up to me to give up coffee, tea and chocolate 😦 while noting that a mostly veggie diet will certain aid in my weightloss campaign.

For more information on LPR, here are a couple of sites.

3 thoughts on “Getting “back””