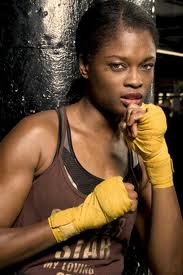 In a rematch of their 6-round fight from this past February which had Gleason’s own Keisher “Fire” McLeod Wells (4-1, 1KO) on top  — Fire will be facing California’s Melissa “Mighty” McMorrow (5-2-3) in the ring on Saturday night, July 30th, only this time in an 8-round bout with the New York State Flyweight Championship belt on the line. McMorrow picked up the belt in a split decision against New York’s Eileen Olszewski on June 24, 2011.

The bout, part of Lou DiBella‘s Broadway Boxing series also comes with DiBella’s commitment to feature at least one women’s bout on all of his future fight cards.  This is welcome news for the sport of Women’s Boxing and Girlboxing sends a huge shout out to the DiBella Entertainment organization for their continued support! 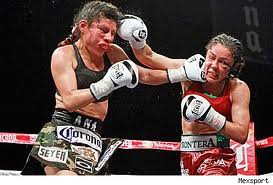 Where can you find Women’s Boxing at its best you ask? Try flying down to the Metropolitan Center in Tuxtla Gutierrez, Chiapas for the chance to see the rematch between Jackie Nava (24-3-3, 11KO’s) and Ana Maria Torres (25-3-3, 15 KO’s), arguably on everyone’s top ten list of women fighters these days.

Their last outing in April was a 95-95 draw on all three judges cards, and as I keep saying their bout was as fierce a boxing battle as ever you’ll see. (Link to article & videos)

In the last presser before Saturday’s battle, Fight News quotes both boxers as saying:

Ana Maria Torres: “The first fight was very tough, we feel that we won it, but this time to avoid doubt look for the knockout with intelligence, without rushing, but just win round after round if the fight would go to decision.”

Jackie Nava: “It would have special meaning to win the Diamond belt. Plus at this point in my career, I am a very experienced fighter who has faced any challenges that has come…the fight will be a war in the ring, I’ll start with great determination and intensity unlike the first fight.”

Thankfully, the fight will be broadcast on Mexican television, which means we get a shot at seeing the fight on YouTube — it’ll also likely be carried live on a video stream so look for it if you want to see this non-stop action fight live.