Why I’m a Christy Martin Fan! 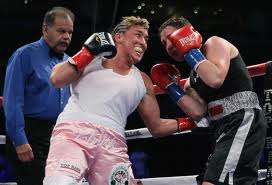 Christy put on a F I E R C E performance, matching the much younger Dakota Stone and then some, not to mention putting her down on the canvas for an eight-count with a classic Left-Right combination that was letter perfect.

By now you likely know that Christy broke her right hand during the 4th round — and proceeded to fight much of the 5th round with her left — only to have the fight stopped in the 6th and final round after throwing the right hand once too often and absorbing some punishment as well putting her into a world of hurt.

At that point, the Ringside doctor called the Ref over who stopped the fight giving Dakota Stone the TKO and the win.  The shame of it was Christy was ahead on all three cards and would have won the battle.

What really wowed me was Christy’s TRUE warrior spirit.

She came out swinging and never stopped even as she took some punches in the 3rd round that clearly rocked her a bit. She also worked combinations through out, throwing jab-jab-rights and mixing them up with body blows, upper-cuts, overhand rights and more jabs.

There are a lot of younger, slicker boy-boxers that could learn a thing or two or three from Martin’s performance, not the least of which is old-school true grit.

I applaud Christy’s tenacity and spirit — even as I hand it to Dakota for garnering the win.

Whatever happens to Christy next, she can count this girlboxer as a friend and a fan for life — ’cause let me tell you, she earned it.

* I could only watch the first four rounds and the beginning of the fifth before the webcast signal died (subject for another night I think — Why aren’t women’s bouts being broadcast on television?!?!?).

5 thoughts on “Why I’m a Christy Martin Fan!”