Working out in the heat!

We’re talking 95 degrees fahrenheit today people and 98 tomorrow … in New York City!  That means summer is full on upon us and time to think about working out in the heat.

Personally, I love working out  when it’s hot. My muscles have an instant lube job and after a while the cascading sweat is like a cooling shower!  There are, however, some good tips to keep in mind, especially as the humidity begins to rise along with the questionable stuff in the air. 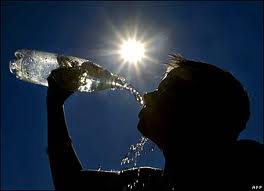 1.  You’ve probably guessed this one! Drink PLENTY of fluids, not so much that you’ll drown, but as a constant flow so that you keep hydrated.  You should also avoid caffeinated drinks and remember to drink some water 15 or so minutes BEFORE you get started. 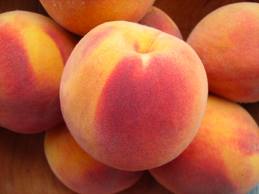 2. Don’t forget you need to eat in the heat!  They don’t have to be huge meals, but small little tastings will more than suffice — especially salads and fruits.  They’re delicious, nutritious and will help keep you hydrated.

3.  Realize that if the humidity is high, you are that much more susceptible to suffering from overheating and other symptoms of heat stress such as nausea, light headedness, dizziness and so on.  That means you need to drink even more, and recognize your own limitations — before you get started.  So don’t plan a 5 mile run in the middle of the heat of the afternoon if you’re not used to running in the heat!  You could well end up with heat prostration in the middle of the Brooklyn Bridge!

4.  Get acclimated to the heat before full-on exercising.  At Gleason’s Gym, while there are exhaust fans and overhead fans that keep it fairly cool (no A/C — its a boxing gym!), it still gets pretty hot on 90 degree + days.  Given that we’ve not had a lot of warm days in the gym, it’s likely a good idea to take it slower than normal to get your body used to performing in the heat and humidity.  A couple of weeks ago we had a pretty hot day — and my problem was the air quality.  Between the high ozone and the pollen I found I actually had to stop a few rounds earlier than planned — so be flexible, and know your body.

One trick is wearing a wet sweat band and throwing water on your head between rounds — I find that helps me a lot.

5.  Be careful not to get caught in extreme temperature changes.  If you’re planning a run and you’re coming out of your really c-o-l-d apartment into the heat, take a few minutes to get used to it.  Conversely, if you’re in the high heat and hit a frozen gym — do the reverse. Acclimatize before hitting full on into a workout.

6.  Wear sunscreen, replace your electrolytes and S-T-O-P immediately if you’re feeling any of the following: dizziness, nauseous, shortness of breath.  You’re going to want to cool down and remember it’s okay to seek medical attention if you really need help.