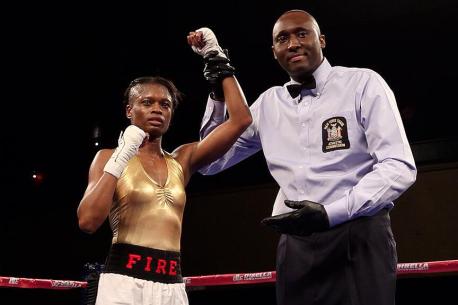 Exclusive Interview with Keisher “Fire” McLeod Wells ahead of her 2/21/13 fight! 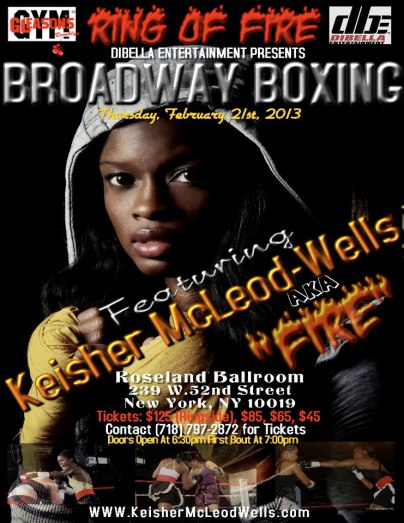 This will be Fire’s first fight since her controversal split-decision against Patricia Alcivar. She forcefully disputes the knockdown call at the end of the 6th round–and in viewing the tape, you’d have to say it did look like a slip.

As for fighter Jacqueline Park, her four-round debut professional fight resulted in a unanimous decision over Amanda Beaudin back in September.

Girlboxing had a chance to pose some Q & A to Fire ahead of upcoming bout, this is what she had to say.

1.  You’ve got a fight coming up on February 21, 2013 on a DiBella Entertainment, Broadway Boxing Card at Roseland Ballroom in New York City.  What can you tell Girlboxing readers about your 6-round fight against Canadian national amateur champion Jacqueline Park?

I don’t know much about her but I know she has a boxer style like my style. I’ve heard good things about her amateur career and that’s what I like to hear. I want to fight good fighters. That’s the only way I get better. It will be interesting to fight someone with a similar style to mine as opposed to the normal and obvious, my opponents usually comes straight forward non stop. I’m used to fighting brawlers and I’ve learned how to deal with them, so I’m excited to box a boxer. However, I won’t be surprised if she changes her style to brawler though because I’m taller. I’m prepared to take on both styles.

2.  The bout is being dedicated to your sister, Bronique, who was a recent innocent victim of gun violence. What do you hope to tell the world about your sister–and the cause of ending gun violence?

My sister was a very gentle and kindhearted individual. She was a great single mother of two young kids. She would come to my fights with support. She loved bragging about me to her friends about being a younger sister to a professional boxer. I am going to miss seeing her face in the audience cheering me on. This fight is being dedicated in her memory on my behalf. This will be my first fight since her death. I took some time off after her passing to cope with the lost of her with my family. This was the first loss my family has experienced, so it hit us really hard. What was more tragic is the way we lost her. Gun violence is so out of control. Using this fight in her memory with my popularity to the sport in NY, I’m hoping to bring more awareness in ending gun violence.

3.  It’s been 11 months since your last outing. You fought against Patricia “Boom Boom” Alcivar, in a tough battle that saw you knock her down in the 3rd and take a shot that was ruled a knock down in the 6th. Still you were triumphant with the judges giving you a split decision win, 57-55 x 2 and 55-57. What have you learned from that fight and what sort of adjustments in your game plan are you making as you head into head into the ring on the 21st?

First, I would like to say I never took a shot from her that landed me on the canvas. I slipped after dodging an unsuccessful punch that never landed by her. You can clearly see that after they replayed it in slow motion. Even the commentaries said it wasn’t a knock down. I was so confused when they started counting. That wasn’t the first time slipping in the ring for me in my boxing career. I can get a little wobbly and clumsy sometimes, but I never been counted out for that in the past. I was upset. I felt I won unanimously regardless of the 8 count. I fought tougher fights giving me unanimous decisions. So I couldn’t understand the split decision. The only adjustment I have for any fight after the one with Patricia Alcivar, is to try not to slip again. I’ve been working a lot on leg strength this time around. So hopefully I’m done with the wobbly legs.

4.  In an article that ran in the New York Times about you two years ago, in answer to a question about how the money side of the fight game doesn’t offer much to women, you said, “I think that’s why we fight harder, because we do this for the love of the sport. There’s no money really to be made.”  After all of the hoopla about women boxing for the first time in the 2012 Olympic Games do you see any changes or an opening up of opportunities for female boxers?
I’ve notice more females making a name for them in the sport. We are getting more exposure. I’m not sure if I would give the credit to 2012 Olympic Games. Promoters here in New York haven’t changed since the games. Maybe it has elsewhere. All I know is that we are still getting paid the same here.

5.  You’re a Golden Gloves Champion four times over as an amateur and bring a 5-2 record coming into your next professional fight. What can you tell up-and-coming fighters about the difference between fighting in the amateurs and fighting as a professional boxer?

The obvious difference is that professional fighters get paid, the headgear comes off and the gloves are smaller. The rounds become longer as well. Fights are more far in between too. However, I feel the reward is greater at the end because you are training for a war that is more brutal than amateur boxing. The training is more intense and so is the fight itself. There is a lot harder punches to be felt and give without the protection amateur boxing gives.

6. Your other love besides boxing is fashion. You’ve also started a jewelry line with wonderful creations that are beginning to adorn half the women in Brooklyn–or so it seems. How are you managing to fit your two love together: boxing and jewelry making?

Being a jewelry designer is what soothes my mind in between fights and training. Each piece I make is from my mind and heart. They’re unique one of kind pieces. It’s wearable art. I get in a zone when I paint (my jewelry). So when my mind and body is tired from training, I relax it by making jewelry. Also, I get a lot of down time when I’m working at Gleason’s on Sundays. So I create here sometimes while I’m here. Some are my items are boxing related, so I find inspiration from Gleason’s.

7. Where do you see yourself going from here, Fire?

I would love to be some kind of TV personality or something in that nature relating to boxing after I decide I don’t want to compete any longer. I never look ahead in the future. I live my life pretty much from week to week. If I had children then I probably would have more sight of my future. Probably a bit irresponsible, but that is the way I’ve always lived my life. I am aiming for a World Title in the near future though, however it comes.

3 thoughts on “Exclusive Interview with Keisher “Fire” McLeod Wells ahead of her 2/21/13 fight!”