Talk about exciting, the 2012 AIBA Women’s World Boxing Championships will be taking place in Qinhuangdao, China. The event will not only determine the world championship status in the competing weight classes but is the *only* qualifying event for this summer’s historic debut of Women’s Boxing at the London 2012 Olympics in the three Olympic weight divisions.

Competitors from all of the world will be arriving in China to face off against each other in the tournament. USA Boxing’s full field of National Champions is set to leave on May 3rd. The team includes the three Olympic hopefuls, Marlen Esparza, Queen Underwood and Claressa Shields, representing the flyweight, lightweight and middleweight divisions respectively.

Under the rules of the Olympic qualifying event portion of the competition, only the top eight competitors in each of the Olympic weight divisions will be selected to represent their nations in the Olympics this summer.

This year’s tournament is the seventh AIBA Women’s World Boxing Championships. The first was held in in late 2001 in Scranton, PA, USA.

Notable luminaries from that first tournament included Sweden’s Frida Wallberg who won a gold medal in the 63.5kg weight class and France’s Myriam Lamare who won the silver. Both of these remarkable athletes have carved out fantastic professional careers. Mary Kom, who will be vying for an Olympic berth on India’s Team also competed in 2001, winning a silver medal in the 48KG division. 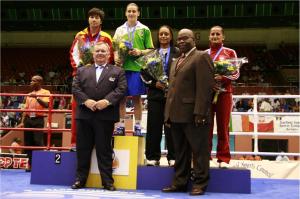 The last AIBA sponsored Women’s World Championship (the 6th) was held in Barbardos in September of 2010.