Your great-grandmother was a boxer too! 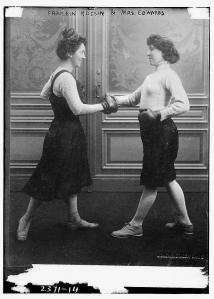 Having spent the better part of four months living and breathing women’s boxing from the perspective of gender (i. e., the only “acceptable” female boxer is a “girly-girl” boxer in pink and other such canards) — I thought it might be fun to remind folks that female boxers have been around for a LONG time.  Here are a few samples from newspaper articles published around the country in the early part of the 20th century (click on the links).

An uppercut from the fair fighter’s fist

This article from The Hartford Herald was published on May 1, 1912 and describes a 7th round knockout by Myrtle Havers, 18 over Mabel Williams, 32  in a 10-round professional fight in Saginaw, Michigan.  In declaring Havers the winner, she was also named the girls champion of Michigan.

“The two fought with eight-ounce gloves and under straight Queensbury rules.  Miss Williams, who has been known as the best woman boxer in Michigan for several years, was knocked into dreamland with a stiff uppercut after she had severely thrashed Miss Havers in the early part of the seventh round.”

This woman boxer weighs 105 and has met two champions

An article advocating women’s physical culture appeared in The Tacoma Times on November 27, 1917.  The article is about boxer Helen Hildreth.  When asked if she had ever been hit hard she replied, “Yes, but that’s part of the game. The excitement and nervous tension you are under when you are boxing makes you forget the pain of a blow almost as soon as you feel it.”

Published in The Ogden Standard-Examiner on March 22, 1922, this article chronicles Elkhart, Indiana’s hope for a female boxing champion in the person of Gertrude Allison, 25 who challenged New York’s Laura Bennett to a fight!  Check out the photo in the article.  Allison is quoted as saying, “I know I can lick her!”