West V. Knight: Boxing the way it’s supposed to be!

Kaliesha West  (13-1-3, 4 KO’s) and Ava Knight (6-1-3, 3 KO’s) fought ten hard Main Event rounds to a draw this past Saturday night at California’s Pico Rivera Sports Arena on what was otherwise a mixed martial arts and Muy Thai fight card.  The judges scored the bout 95-95, 96-94 Knight and 96-94 West.  The draw meant that West was able to retain her WBO female bantamweight title.

Both women fought their hearts out in their second outing together.  In their first meeting, Knight had handed West her only loss.  One can only hope that their likely third match will be as exciting.

In listening to West’s interview after the fight, the resounding message is one of respect for her opponent and a sincere desire to better her sport.  All I can say is what sports-womanship!  And beyond that, a giant Girlboxing shout to advocate for putting  women’s boxing of this caliber on something other than streaming video! 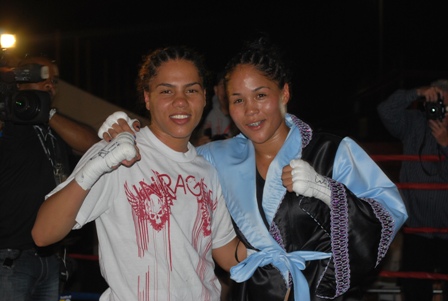 If ever a fight should have been broadcast it was this one! It was a rematch of a terrific fight. It was Kaliesha West’s first outing after a horrific car wreck — and more to the point these two women CAN FIGHT and represent the best in their generation of up-and-coming strong women’s boxers who not only fight with skill but with heart!

Perhaps with National’s going on now, World’s in the Fall and the Olympic trials next Spring some more momentum will swing towards women’s boxing — but I’ve got to say that the continuing black-out of women’s boxing on main-stream American television not only denies a loyal fan base the opportunity to follow their sport, but importantly denies these tremendous fighters an opportunity to grow and progress as athletes.

It’s time to bring the sport to the next level!

For a nice recap of the fight, check out The Sweet Science here.