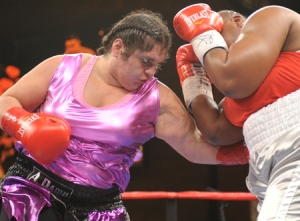 Girlboxing friend Sonya “The Scholar” Lamonakis (4-0, 1-KO) will be fighting on the under card of the “East-West Showdown: Andre Berto vs. Victor Ortiz,” welterweight pairing on this coming Saturday night, April 16, 2011 @ the MGM Grand, Foxwoods to be broadcast live on HBO.  Promoted by Lou DiBello Entertainment and the always exciting Sonya Lamonakis, ranked the number 3 women’s heavyweight contender in the world by   will be mounting her 5th professional fight since turning pro last year against boxer Gigi Jackson (2-1) .

Tickets for the event start at $65.00, and can still be purchased through Gleason’s Gym (minus the ticket handling charges!).  Contact Gleason’s as 718-797-2872 for tickets and further information. 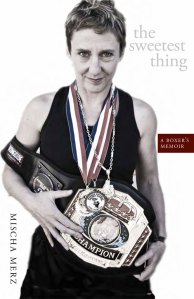 Another Girlboxing friend, Misha Merz will be having a book signing 2night for her boxing memoir The Sweetest Thing at Gleason’s Gym running from 6:00 – 8:00 PM.  Misha will be on hand to read from her memoir to the wonderful sounds of the sweet science in the background.  For further information you can contact Gleason’s Gym @ 718-797-2872.  Or just come on by to 77 Front Street, Brooklyn, NY (in DUMBO).

Hold the date of April 19th for a great night of boxing in Uruguay promoted by Sampson Boxing.  The main event will be UBO Women’s Lightweight champion Cecilia “La Reina” Comunales (7-1-0, 5 K.O.‘s) from Uruguay taking  on Alicia Susana Alegre (7-4, 7 K.O.‘s) from just across the river in Argentina for an exciting evening of women’s boxing at its best.  Dubbed “La Defensa Del Reino” or “Defending The Kingdom”, the event is being heavily promoted in South America and will be viewed on Vtv, in Uruguay.  The fight will also likely be video streamed – so do some checking online.