Women’s boxing from around the amateurs! 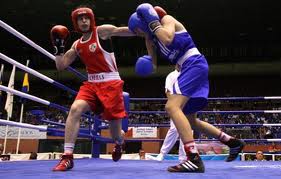 It seems that Women’s Olympic boxing in 2012 will be minus one potential powerhouse team:  Cuba.  Why?  Well as noted in a piece on Reuters yesterday, “Cuban head coach Pedro Roque was quoted as saying in 2009, when women’s boxing was added to the Olympic programme, that Cuban women “are made for beauty and not to take blows around the head”.

Meanwhile, AIBA (International Amateur Boxing Association) officials stated yesterday that they are confident that the lure of gold will eventually sway Cuban officials to support women’s boxing at the elite amateur level, perhaps in time for the 2016 Olympic Games in Rio.  The link to the full article is here.

The team has been training at the Polish Olympic Training Center with the Polish and Italian Team readying for the competition.  As noted by USA Boxing, “the event is the first international competition for the trio of women since the Women’s International Dual Series in Oxnard, Calif., in November and will provide valuable international experience for all the competitors prior to the Olympic debut of women’s boxing in 2012.”  The link to the full article is here.

The 2011 USA National Championships are set to run from June 19 – June 26, 2011 in Colorado Springs, Colorado.The published schedule is:

Participant forms are due by June 1st!  The link to USA Boxing’s information sheet is here.

2 thoughts on “Women’s boxing from around the amateurs!”