Watching Bernard Hopkins fight Jean Pascal last night was reminiscent of an epic battle between two samurai: the one a world-weary older fighter and the other a young prideful upstart receiving his comeuppance. 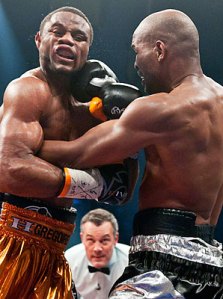 That the fight was scored a draw is unfortunate as it was clear that Hopkins had defeated Pascal in spite of the two knock-downs Hopkins suffered in the early rounds of the fight.  More to the point, by the 11th round, Hopkins had taken Pascal’s heart and while the younger man fought gamely on, everything about his defense spoke of his having been shattered by the tenacity and grit of his older opponent.

If those of us of a certain age had all cheered on George Foreman when he returned to the ring, Bernard Hopkins’ insistence on his viability as a fighter has had something magical about it.  Think Nolan Ryan throwing aces at the age of 46 for the Texas Rangers and one can see that it is still possible to be at the very top.  In Ryan’s case he’d adjusted his pitches to give himself the longevity he wanted.

For Hopkins, conditioning is what keeps him viable along with his boxing savvy and the depth of his understanding of the game.  Sure he’s suffered losses, but to see him throw body punch after body punch with the force of a jack hammer against Pascal was to know that he can keep on fighting for a long time to come.  The only question will be balancing his desire to box with the chances he takes every time he receives a blow to the head.

Whatever the case, while he was robbed of a win last night, it really doesn’t matter because we all know that Bernard Hopkins is a true champion.