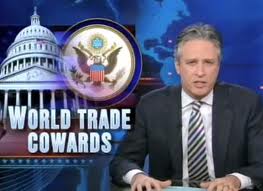 Last night Jon Stewart did  something amazing — he dedicated his entire show to the cause of revealing the hypocrisy of the GOP in the Senate for failing to bring the all important James Zadroga 9/11 Health and Compensation Act to a vote.

The House passed the bill on September 29, 2010.  Senate Majority Leader Harry Reid claims that the Senate has the votes to pass it, however, the GOP is blocking Reid’s ability to bring the bill to the floor.

This piece of legislation will provide funding for 9/11 first responders to receive continued health care, medical monitoring and other financial support. Without it many will fall even further behind as they not only deal with the burdens of their diminished health, but the ignominy of fighting with insurance companies and workman’s compensation to pay their medical claims. 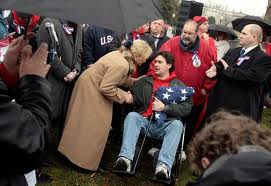 For those who don’t know, the men and women who worked tirelessly on the “pile” for months and months at a time are sick and getting sicker with illnesses that range from severe breathing disorders to cardiac disease to soft tissue cancers.

In giving a forum to Kenny Specht, Ken George, John Devlin and Chris Baumann, four tireless first responders each of whom is sick with horrific illnesses, Jon Stewart provided airtime to people who have otherwise been denied a voice.

Implied in his forum was the plaintive question — is America really leaving its wounded behind to die?   The politicization of the 9/11 bill sure makes it seem that way.

All truly proud Americans must do no less than Jon Stewart and provide a forum to call-out the continued hypocrisy of invoking 9/11 on the one hand for the furtherance of political agendas and on the other — failing to provide the material support necessary to give aid and comfort to the dying.

It is shameful — and every blogger, everyone on a social networking site should do no less than Jon Stewart and dedicate a post to exposing the hypocrisy for what it is, a disgraceful blight on the memory of all of those who have died.

The link to the Jon Stewart show is here.