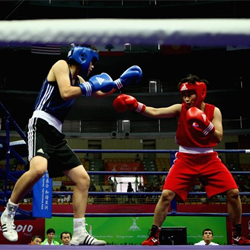 “You know what a champion is? A champion is someone who’s ready when the gong rings – not just before, not just after – but when it rings.”  – Jack Dempsey

The Times of India is covering a story on the 11th Women’s Boxing Championship that will be held in Thrissur, India.  Participants have started at their training camp in preparation for the first round of bouts on December 4th.  This championship shall set the stage for selecting the Indian national team that will go on to fight in the 2012 Olympics.

Many young Indian women are finding their way into boxing as a means of elevating their status — and getting themselves and their families out of poverty.  This is not so different from the reasons many young men and women have found their way into sport in the United States.  And let’s face it, while we think of it as a sport, in my opinion boxing is much more than that.  It is about heart and facing the kind of fear that can otherwise cripple a person.

A champion in the ring is a person who understands that and overcomes it.  Win or lose the mere fact of getting in the ring counts for something.  So, if you are fighting today, think about what Jack Dempsey said and be ready when the bell rings.

The New York Times wrote about the phenomenon of women’s boxing in India here.  It is worth the read.