By the time the bout was over, Wallberg had broken Serrano’s unbeaten record for the WBC Women’s Lightweight Championship belt. The battle was fought in Wallberg’s home country of Sweden, and while fighters have complained in the past about the “hometown advantage,” this was clearly not the case here.  The judges scored the bout 96-94, 97-93, and 98-92.

“I gave it my all,”  Serrano is quoted as saying. “I know I landed some good shots in the fight and I’m not ashamed of my performance. Frida Wallberg is a great fighter and I take nothing away from her victory. I’m going to bounce back from this bump in the road and work my way back to the top. I want to thank all my fans who’ve been there for me and I promise I’ll be back.”

Full two-part video had been up on YouTube last night but has been pulled down.  I found another video and while not complete, it does provide 13 minutes of action.

South Korean boxing champion Ju Hee Kim (15-1-1, 6,KO’s) dominated Fahpratan Looksaikongdon (7-3, 0-KO’s) in their WIBC Light Flyweight title fight.  This gives Kim her fifth title!  As noted, in an article in the Korea Herald, Kim said “I am so happy to have achieved my goal of becoming champion of the five world organizations.”  Click here for link. 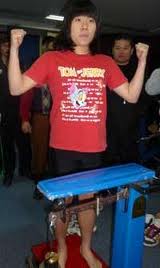 ->>>There is also a full card of women’s boxing in Jeollanam-do, South Korea at the Wando Farmers and Fisherman Sports and Culture Center.  These bouts will be televised on KBS-N Sports in South Korea.  (And from Girlboxing’s perspective, giant “ups” to South Korean television for recognizing the value of the sport!) 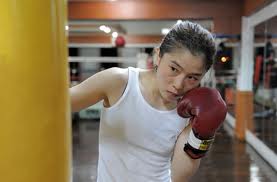 ->>>A second IFBA championship bout will be held on July 16th in Jaechum, South Korea.  In this bout the IFBA Strawweight championship will pit title holder and South Korea’s own Ji-Hyun Park (13-5, 0-KO’s) seeking her seventh straight win against another Chinese contender, Sun Qun Yan (5-2, 0-KO’s).

On a side note, former IFBA title holder Kim Messer will be serving as a fight supervisor for the IFBA organization — a home-coming of sorts as Messer was born in Jaechun, residing in an orphanage there until being adopted by an American family and coming to the United States.

For a preview of Ju Hee Kim, here is video of last year’s ten-round slug fest against Jujeath Nagawa (9-10-1, 5-KO’s) of the Philippines.