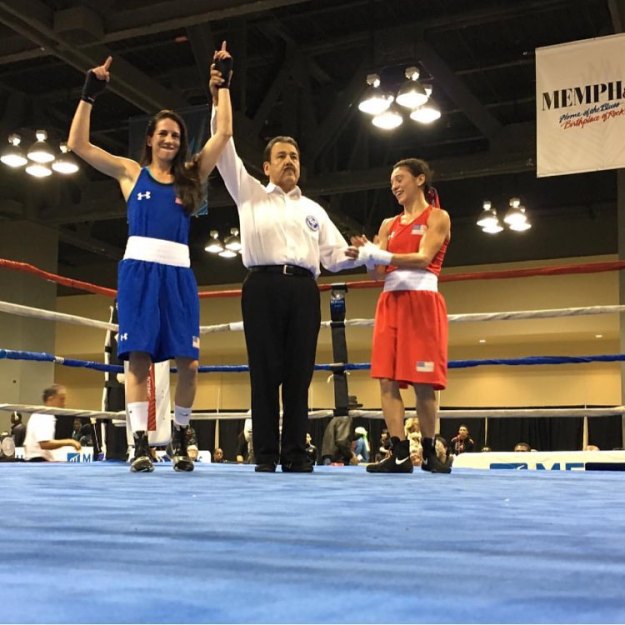 Flyweight Christina Cruz (l) with the win over Giavonna Camacho in the challenger battle, has earned a rematch against Marlen Esparza on Friday. Both will battle for a spot in the finals against Virginia Fuchs.

With the first group of Finalists set – Virginia Fuchs (112 lbs.), Mikaela Mayer (132 lbs.), and Claressa Shields (165 lbs.) – the first challenger bracket bouts were held last night in the double-elimination Olympic Trials Tournament. The winners fight again tonight for the right to box in the finals on Saturday night.

The first of the three contenders for Friday night action is Christina Cruz (112 lbs.). Cruz is 32 years of age and will have her second shot at doing battle with 2012 Olympic Bronze medalist Marlen Esparza whose stunning loss to Ginny Fuchs has put in her the challenger bracket.  Cruz lost to Esparza in the second round, but given how much she has amped up her game with her renewed focus, training and diet, she might well push through Esparza on Friday. Cruz handily defeated  Giovanna Camacho for the second time to gain the right to keep on challenging for a berth in the finals.

Jajaira Gonzalez (132 lbs.), the 18-year-old who pushed hard in her battle against Mikaela Mayer in the second round only to fall in defeat, used pressure and aggression to defeat Rianna Rios 3-0.  Gonzalez will face Tiara Brown, in what promises to be a terrific battle of wills between these two fighters, for the right to face Mayer in the finals.

Tika Hemingway (165 lbs.) narrowly defeated veteran Franchon Crews 2-1. Both fighters had competed in the Olympic Trials in 2012. Hemingway used aggression to finally muscle through to take the contest though Crews was able to gain the momentum throughout the bout. Hemingway will take on Raquel Miller in the challenger contest for the right to fight Claressa Shields in the final.