Emma Chambers Maitland was a female boxer in the 1920s and 1930s who graced the stage with her boxing act in the United States and France. Born in 1893 in Virginia where here parents were tobacco farmers.  She was fiercely independent and more than anything wanted to be a teacher. She eventually earned a license and made her way to Washington DC were she met and married Clarence Maitland who was studying at Howard University to be a doctor.

What had seemed the beginning of an ideal life, however, fell apart when her new husband died of tuberculosis. By then she had a small child.  Seeking out something better–and after setting up her daughter at her parents home–Emma Maitland made her way to Paris where she became a dancer and eventually, a boxer, training with former heavyweight Jack Taylor, known as the Nebraska Tornado.

Back in the United States, Maitland acted as well as danced and also continued to perform with Wheeldin where they had the reputation of “putting on a real fight.” Maitland was also said to have fought competitively outside of the boxing act with female fighters up from Cuba and Mexico. As with female boxing acts in the past both Maitland and Wheeldin billed themselves as champion boxers.

Wheeldin eventually retired from the stage in 1940, but Maitland continued for a while, also picking up work as a “lady wrestler.” She eventually left the stage and began teaching dance and gymnastics before she became a nurse, eventually moving up to Martha’s Vineyard. She passed away at the age of 82, and has since been honored there as part of the African-American Heritage Trail. 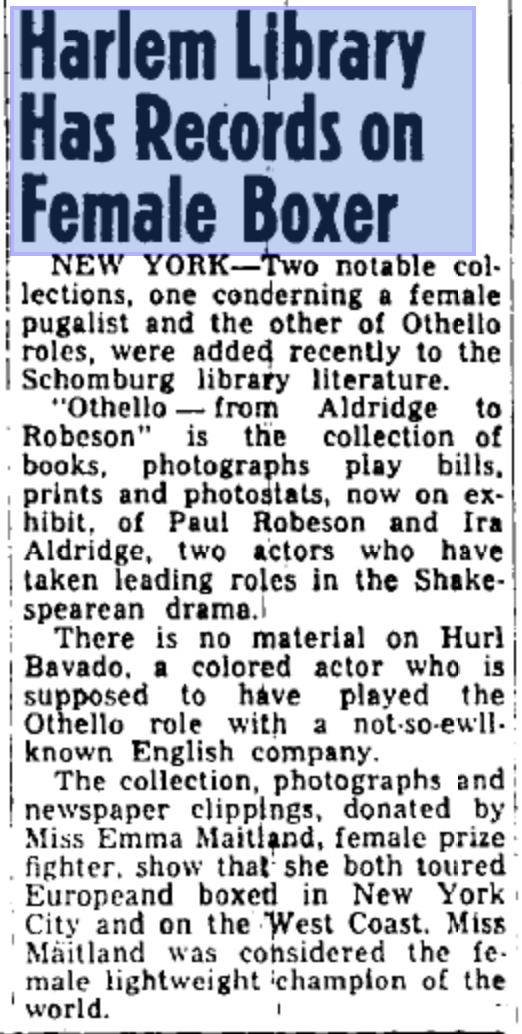 For further information on these remarkable women, please click on the links.