Women’s boxing is going for the Gold!

Marlen Esparza, Claressa Shields and the ten other semi-finalists who will be battling it out today have spent years getting to this point.

India’s Mary Kom boxed in the first International Boxing Association (AIBA) Women’s World Boxing Championships held in November 2001 at a venue in Scranton, PA. Mary was one of 125 boxers who participated in the championship and won a Silver medal in the 48KG division. She subsequently won Gold in 2002, 2005, 2008 and 2010.

China’s Cancan Ren who will face Marlen Esparza in the semifinals is also a Gold medalist having won in 2008, 2010 and 2012. Marlen herself is no stranger to achieving the top spot in her sport having won the USA Boxing national championship five times in her career.

Ireland’s Katie Taylor is considered pound – for – pound about the best that women’s amateur boxing has to offer and if her quarterfinal bout against Natasha Jonas is any indication she is well on her way to Gold in the lightweight division.

And not to say that these remarkable athletes are only in it for the Gold, but as competitors they won’t say no to the opportunity to shine.

As members of the first class of female boxing Olympians there is, of course, a little something extra to the achievements that their considerable talent, gumption and strong work ethics have given them. Whatever happens they will hit the history books–and why not, they deserve every brilliant accolade coming to them for persevering in a sport that loves to hate them.

Okay, I give up–I thought that Marlen Esparza and Claressa Shields are fighting today for the chance to win a Bronze, Silver or Gold U.S. boxing medal. I guess I got that wrong–or is it that ESPN doesn’t consider that Marlen Esparza, Queen Underwood and Claressa Shields were worth noticing as members of the U.S. Olympic boxing team; not to mention consideration for the years and years and years of work and effort they put into becoming Olympians: win or lose. 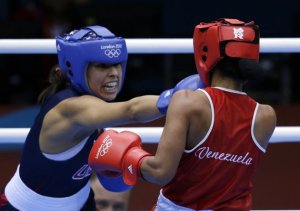 Still Marlen and Claressa will box.

They will box alongside the other ten Olympians who have made it to the semifinals and leaving all the doubters and naysayers behind will fight their hearts out for Gold. It will be Gold they can feel proud of as a personal achievement, and yes for a bit of national pride too, no matter that for some of the women who will box for the chance to win Gold, it will be nothing more than an asterisk that’ll sit next to the “no U.S. boxing medal” mindset or equivalent nonsense thereof.