First up will be China’s Cancan Ren against Elena Savelyeva who won by decision yesterday over Hye Song Kim 12-9, in the first women’s Olympic bout in history. 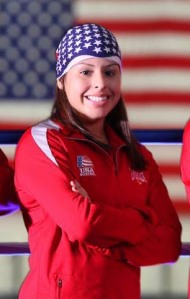 The USA’s medal-hopeful and six-time national champion, Marlen Esparza will fight Karlha Magliocco of Venezuela who won her bout by a 15-14 decision against the Brazilian flyweight Erica Matos.

Next up will be India’s great champion Mary Kom who fought a gallant prelim bout against the much larger Polish fighter Karolina Michalczuk taking the decision by a score of 19-14.  Kom faces Tunisia’s Marous Rahali who had a BYE yesterday.

The last flyweight quarterfinal match will pit Bulgaria’s Stoyka Petrova who proved herself to be a talented competitor in her bout against New Zealand’s Siona Fernandes by taking the decision 23-11 against Great Britain’s Nicola Adams.

The great Irish fighter Katie Taylor who as the number one seed is favored to win the gold may have had a BYE yesterday, but she will have her hands full when she faces the popular British fighter Natasha Jonas.  Jonas defeated the highly popular USA fighter Queen Underwood in a heartbreaker in the prelim round taking the decision 21-13.

The second fight will pit China’s Cheng Dong who won her quiet bout 10-5 against Mihaela Lacatus of Rumania.  She’ll face Mayzuna Chorieva of Tajekistan who had a BYE in the prelims.

The next outing will pit the scrappy Brazilian fighter Adriana Araujo who pulled out her win with fierce forth round action against Khassenova Saida (KAZ) by decision with the score of 16-14 against Mahjouba Oubtil (MAR) who will be making her Olympic debut.

The last lightweight bout will pit New Zealand’s popular boxer Alexis Pritchard who took her decision 15-10 against a very scrappy Rim Jouini of Tunisia against Russia’s Sofya Ochigava who sat out yesterday’s prelims with a BYE.

Great Britain’s Savannah Marshall, the number one seed in the middleweight division will make her Olympic debut facing Marina Volnova (KAZ) who took her decision 20-11 against Kenya’s great champion Elizabeth Andiego who quite frankly gave it her all in the ring during their preliminary bout–and should have won on heart alone. 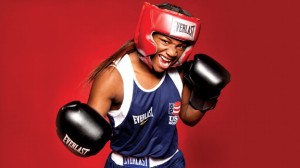 Claressa Shields, the 17-year-old American phenomenon will enter the Olympic boxing ring for the first time against Sweden’s Anna Laurell who fought a tight technical bout against Australia’s Naomi Rasmussen winning the bout with a 24-17 decision.

The third bout will see Canada’s best hope for a boxing medal Mary Spencer against China’s Jinzi Li who fought a tough controversal bout against Brazil’s Rosell Feitosa. Li won the bout 19-14, but commentators felt that while she may have won the bout, the fourth round scoring did not accurately reflect action in the fight.

The last quarterfinal bout will pit Nigeria’s Edith Ogoke who won a close hard fought bout against Elena Vystropova (AZE) by the score of 14-12.  Ogoke is matched against the number two seed, Russia’s Nadezda Torlopova who sat out the prelims with a BYE.