This will be war!

We’re talking two huge IBF female championships that will be fought this coming Saturday, March 24th at the Palacio de Deportes in Santo Domingo in the Dominical Republic promoted by none other than Sampson Boxing.

Current IBF Female Featherweight Title Champion Dahiana Santana (21-6-0, 12-KOs) will be fighting her third rematch with challenger Stacey “Staylo” Reile (10-4-0, 4-KOs) who initially won the title against her in March of 2011 before losing the title to Santana in November 2011.  Their third meeting is much anticipated and should be a tough, tough fight. 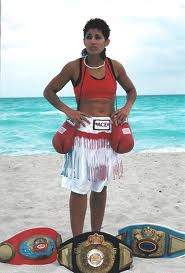 For a mash-up preview of Saturday night’s boxing card watch the junior featherweight bout between Ada Velez and Stacey Reile from February 2010 — (along with a Girlboxing shout out to YouTube!).