Mbali “Don Queen” Zantsi is a female boxing promoter with a dream, and as reported by Bongani Magasela in the Soweto Live newspaper, she is about to realize it with her second all-female boxing tournament to be held at Kempton Park Civic Centre in Soweto on Saturday, August 27, 2011. 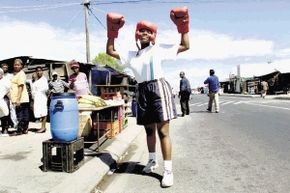 The For Us (women) By Us (women) – For Women By Women tournament will occur during South Africa’s Women’s Month, an annual event each August — with this year’s tournament set to bring new talent into the fore of South Africa’s growing female boxing scene.  It should be noted that Women’s Boxing only became legal in South Africa in 2001.

It was just five years ago when Zantsi put on her first tournament in Durban. That event brought such female boxing luminaries as Noni “She be stinging” Tenge, Unathi Myekeni and Bomikazi Klaasto the ranks of professional boxing.

Tenge went on to win the women’s IBF welterweight title with her fourth round knockout of Daniella ”The Diamond” Smith this past June.

This will be Zantsi first event after a two-year hiatus. As quoted in the Soweto Live paper, she stated, “We are back with a bang and we are going to rock the boxing world.”

The tournament will also feature an all female roster of referees, judges, time keepers and ring announcers.